What is the ESA Travel Ban?

In January 2021, the Department of Transportation (DOT) revised the Air Carrier Access Act (ACAA), enacting a new rule regarding the transportation of animals by air.

The DOT’s new rule gives airlines permission to deny emotional support animals (ESAs) the service animal treatment, allowing airlines to treat ESAs as pets and charge the passenger a pet fee. The passenger will need to follow the airline's rules on pets flying in the cabin, which include size, breed, and capacity restrictions. The new regulations will also limit service animals to dogs only, requiring advance notice and documentation of the dog’s training. To bring a pet in the cabin, the cost can range from $75 to $200 depending on the airline.

If the animal meets the airline’s requirements for flying as a pet in the cabin, you can bring it on board as if it were a carry-on item, but only certain types of animals qualify. They must be small enough to move around in a carrier that fits under the seat, and they have to stay in the carrier while on the plane. Airlines only allow a certain number of pets per flight. Larger pets would only be able to fly as cargo, but not all airlines carry pets as checked items.

The new rule has been wildly controversial. Many advocacy groups argue that the new rule is extremely unfair to Americans with disabilities and those who depend on ESAs because of conditions like anxiety, depression, and post-traumatic stress disorder (especially given the mental health crisis during a worldwide pandemic). Other factions argue that the rule is fair, citing that it places pragmatic limits on the size and species of pets that passengers can bring inside the cabin.

With a nation divided on the issue, Vet Naturals went straight to the source, surveying 1,841 Americans around the U.S. to gauge the collective feelings around the new ESA travel ban. We collected opinions by state and generation and were also able to glean insights from American dog owners and registered ESA owners, specifically.

Read on to see what the survey results hold!

States Most & Least Opposed to the ESA Travel Ban 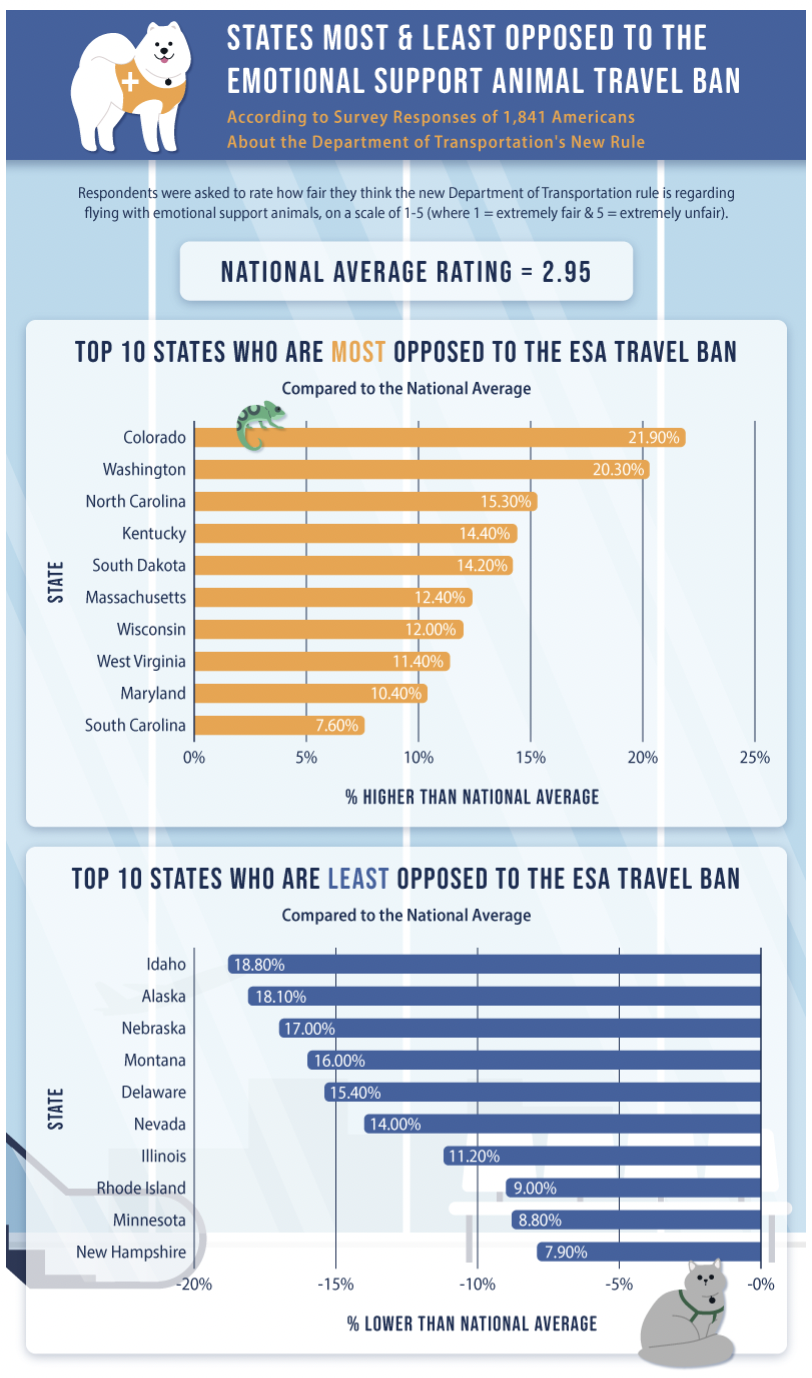 Opinions about the ESA travel ban vary quite a bit from state to state. We asked respondents in each state to rate how fair they think the new Department of Transportation rule is regarding flying with emotional support animals, on a scale of 1-5 (where 1 = extremely fair & 5 = extremely unfair). The national average rating across all fifty states was 2.95.

With an average rating of 3.6, 21.9% above the national average, residents in Colorado are most opposed to the ESA travel ban, which makes sense given the state has some of the strongest animal protection laws in the U.S. Other states notably opposed to the DOT’s rule include Washington and North Carolina with average ratings of 3.56 and 3.41 respectively.

State residents that are least opposed to the ESA travel ban are in Idaho, with an average rating of 2.40, 18.8% lower than the national average rating. Following Idaho are Alaska and Nebraska with ratings of 2.42 and 2.45 respectively.

How Do Americans Feel About the Emotional Support Animal Travel Ban?

American opinions about the new DOT rule are fairly split down the middle. 39% of Americans overall say that it’s fair, 36% say it’s unfair, and 25% feel neutral about the issue, indicating they see pros and cons of both sides.

For respondents who do think the DOT rule is fair, the largest portion of respondents (35%) say it’s fair because it places reasonable limits on the size and species of pets that passengers can bring inside the cabin – undoubtedly stemming from scenarios in recent years where passengers have brought non-traditional ESAs within the cabin such as miniature horses, peacocks, and pot-bellied pigs.

When asking respondents, which factor would most prevent them from flying with their dogs now that ESAs have been stripped of the service animal treatment, 41% of overall respondents and 50% of ESA owners say the biggest barrier will be the expensive pet fee mandated by airlines. This sentiment makes sense given some airline pet fees can be more expensive than the flight itself. Airlines like Delta & American charge $125 for a carry-on pet and $200 for a checked pet. According to the Washington Post, the DOT estimates that the new rule will cost travelers up to $60 million a year.

Based on survey responses, younger generations have a soft spot for ESAs. When asked if they believe emotional support animals should have the same rights as service animals when it comes to flying, 85.2% of Millennials and 73.2% of Gen Z respondents say “yes.” 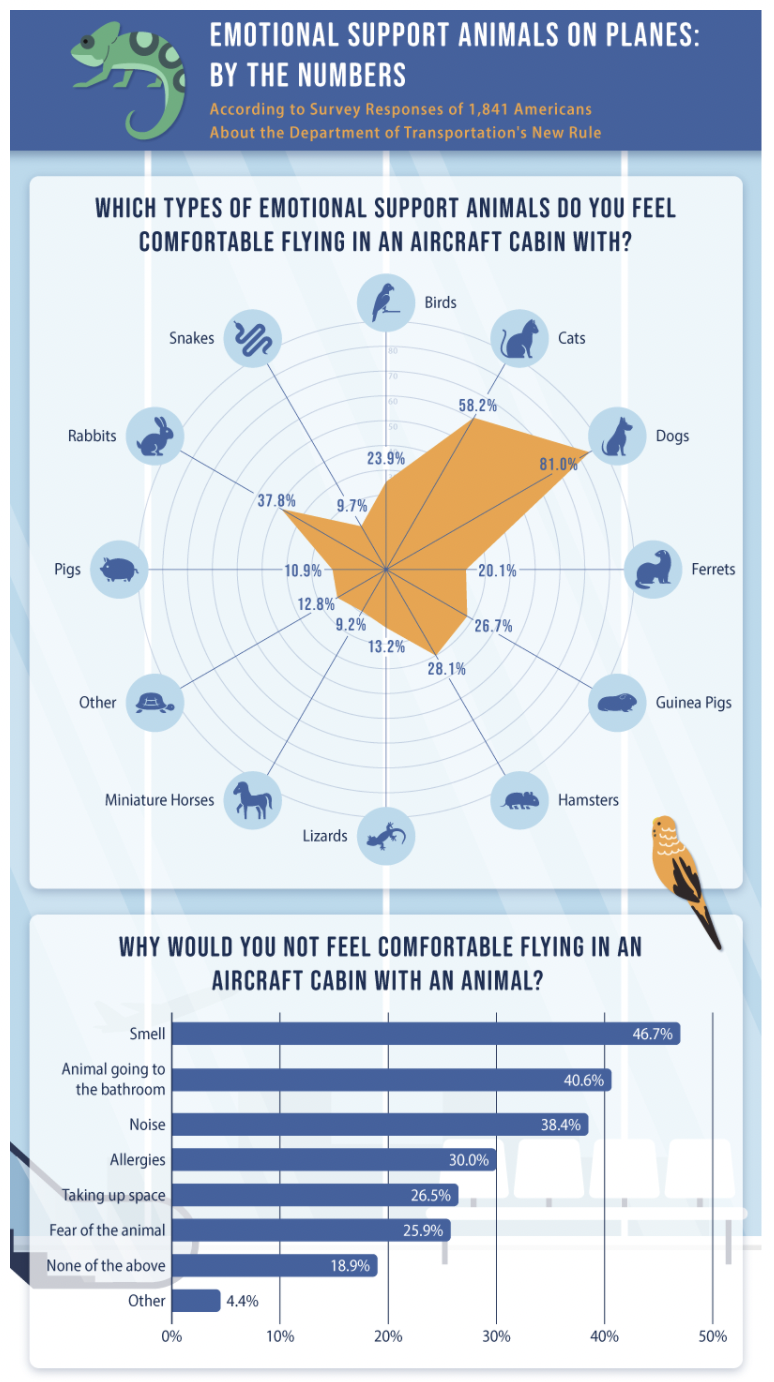 Estimating Potential Lost Revenue Due to the ESA Travel Ban

To wrap up our study, we ran the numbers on potential lost revenue in 2021 for all airlines both per day and per year due to the implementation of the DOT’s new rule. According to survey results, 30% of respondents will cancel at least one upcoming flight in 2021 due to the new DOT rule. If we attribute that percentage to the airline industry as a whole, here’s how it breaks down: